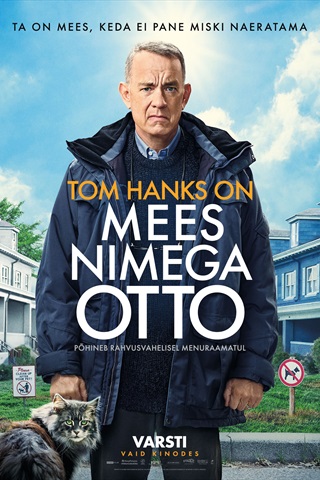 Based on the comical and moving # 1 New York Times bestseller, A Man Called Otto tells the story of Otto Anderson (Tom Hanks), a grumpy widower who is very set in his ways. When a lively young family moves in next door, he meets his match in quick-witted and very pregnant Marisol, leading to an unlikely friendship that will turn his world upside-down. Experience a funny, heartwarming story about how some families come from the most unexpected places.

A family struggling with loss finds themselves at the mercy of an ancient demon trying to destroy them from the inside.

The feature film based on Eduard Bornhöhe's story published in 1892 takes the viewer to the end of the century when Estonia was still part of the tsarist state. Pride in one's nation was emerging and the desire to give something eternal to one's people at any cost - be it a miracle machine flying in the air or valuable literature written in the language of the country. 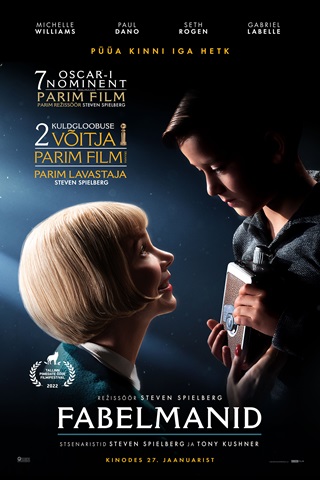 Steven Spielberg’s most personal film yet is based on the master director’s childhood passion for moviemaking, and the family dynamics that found their way into his work. 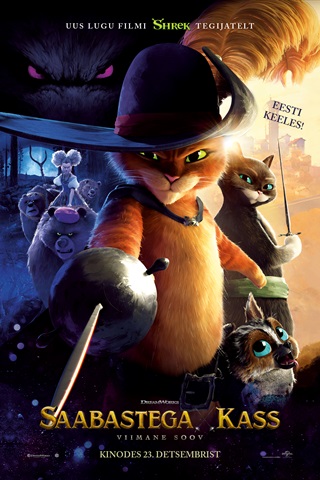 Puss in Boots: The Last Wish

Puss in Boots: The Last Wish

Puss in Boots discovers that his passion for adventure has taken its toll: he has burned through eight of his nine lives. Puss sets out on an epic journey to find the mythical Last Wish and restore his nine lives. 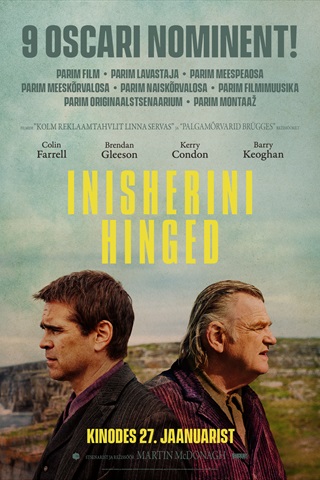 The Banshees of Inisherin

The Banshees of Inisherin

The story of a seemingly inconsequential feud that spins wildly out of control. A rocky coastal path, pony-drawn traps, a rainbow in the sky and Colin Farrell striding along with a top o’ the morning spring in his step… This could be the corniest kind of Hollywood Irish fantasy, if The Banshees Of Inisherin wasn’t written and directed by Martin McDonagh, whose acclaimed stage plays and films (including In Bruges and 2017’s Three Billboards Outside Ebbing Missouri) were rightly celebrated for their mischievous and very dark irony. 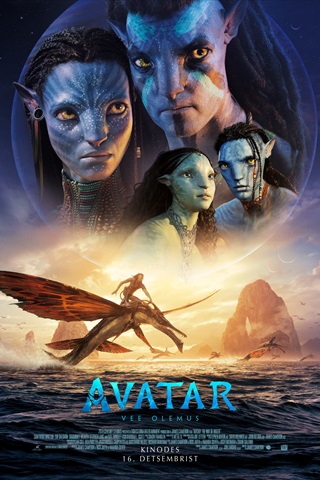 Avatar: The Way of the Water

Avatar: The Way of the Water

Set more than a decade after the events of the first film, “Avatar: The Way of Water” begins to tell the story of the Sully family (Jake, Neytiri, and their kids), the trouble that follows them, the lengths they go to keep each other safe, the battles they fight to stay alive, and the tragedies they endure. Directed by James Cameron and produced by Cameron and Jon Landau, the film stars Zoe Saldana, Sam Worthington, Sigourney Weaver, Stephen Lang, Cliff Curtis, Joel David Moore, CCH Pounder, Edie Falco, Jemaine Clement and Kate Winslet. 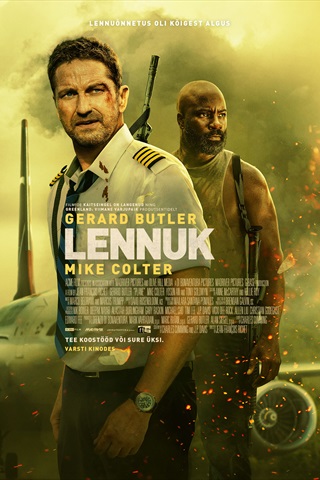 In the white-knuckle action movie PLANE, pilot Brodie Torrance (Gerard Butler) saves his passengers from a lightning strike by making a risky landing on a war-torn island - only to find that surviving the landing was just the beginning. When most of the passengers are taken hostage by dangerous rebels, the only person Torrance can count on for help is Louis Gaspare (Mike Colter), an accused murderer who was being transported by the FBI. In order to rescue the passengers, Torrance will need Gaspare’s help, and will learn there’s more to Gaspare than meets the eye. 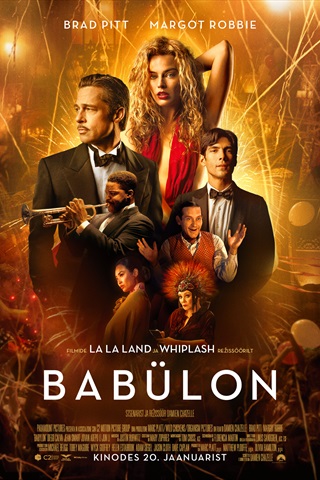 A tale of outsized ambition and outrageous excess, it traces the rise and fall of multiple characters during an era of unbridled decadence and depravity in early Hollywood. 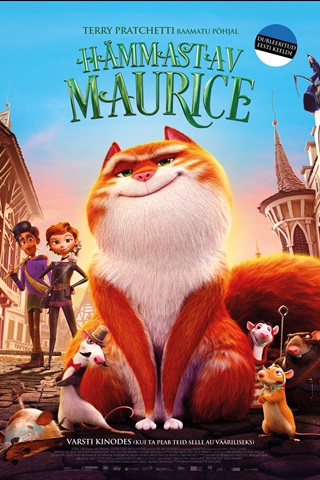 Based on 2001 Terry Pratchett’s book “The Amazing Maurice and his educated rodents” that won the Carnagie medal of best children book of the year, tells a story of a Maurice, clever cat who one day discovered that he can think and talk. Since that day, he has gone from town to town with trained rats and a slightly naive boy, Keith, and used his new abilities to run small scams. But one day they find themselves in a town called Bad Blintz, where something mysterious seems to be happening. 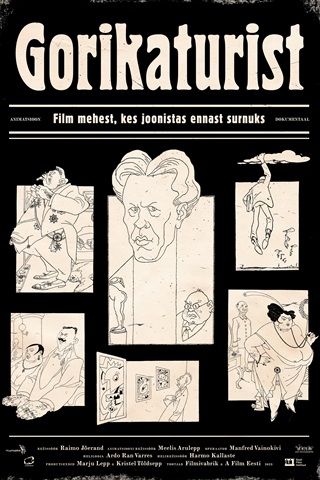 A richly animated documentary about the extremely popular caricaturist Gori, whose fate in Estonia at the beginning of the last century shows the balance between power and freedom like a mirror. In the Fellini-like world of Gori (1894-1944), farce and drama, mockery and big politics mix. There is no subject that Gori's pen will not mock until the winds turn and mouths are being closed. Power is concentrated in the hands of new dictators. And that power fears nothing more than its own ridiculousness. However, ridiculing the enemy is one of his most effective weapons. 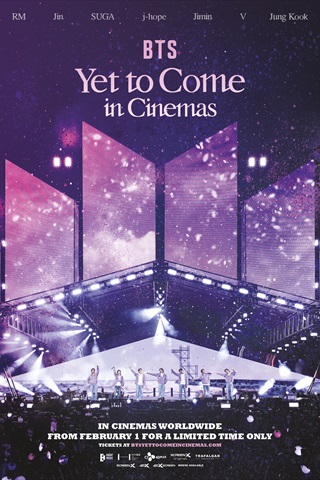 BTS: Yet To Come in Cinemas

BTS: Yet To Come in Cinemas

Join RM, Jin, SUGA, j-hope, Jimin, V and Jung Kook in this special cinematic cut, re-edited and remixed for the big screen. Watch new close-up angles and a whole new view of the entire concert, BTS in Busan. Featuring hit songs from across the group's career, including “Dynamite,” “Butter” and “IDOL,” plus the first concert performance of “Run BTS” from the group’s latest album Proof. See you in cinemas around the world in this celebratory moment. Let’s have fun! 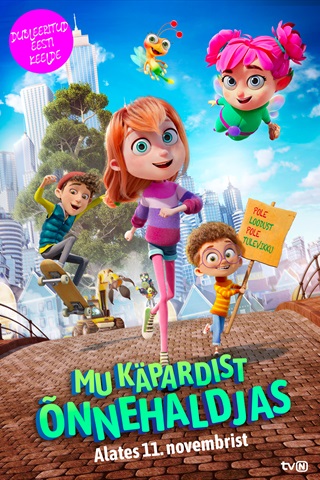 A cheeky fairy named Violetta gets lost into the human world. To go back to the fairy world, She meets and teams up with a 12-year-old girl named Maxie and discovers her true destiny. 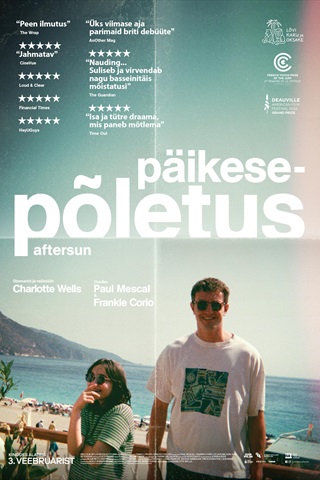 Sophie reflects on the shared joy and private melancholy of a holiday she took with her father twenty years earlier. Memories real and imagined fill the gaps between as she tries to reconcile the father she knew with the man she didn't. 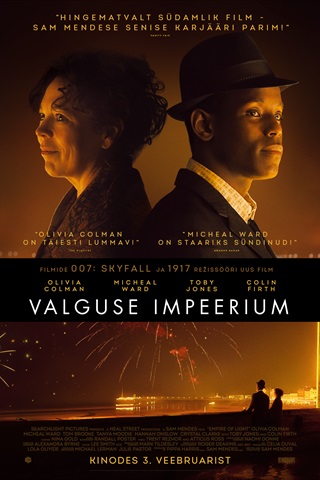 Hilary (Olivia Colman) is a cinema manager struggling with her mental health, and Stephen (Micheal Ward) is a new employee longing to escape the provincial town where he faces daily adversity. Together they find a sense of belonging and experience the healing power of music, cinema, and community. 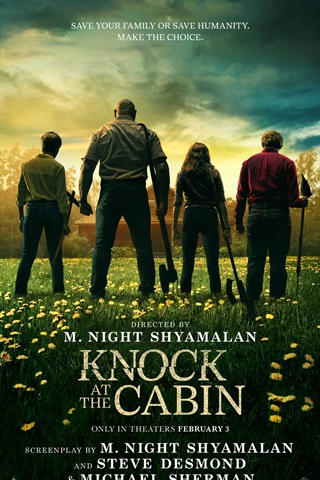 Knock at the Cabin

Knock at the Cabin

While vacationing at a remote cabin, a young girl and her parents are taken hostage by four armed strangers who demand that the family make an unthinkable choice to avert the apocalypse. 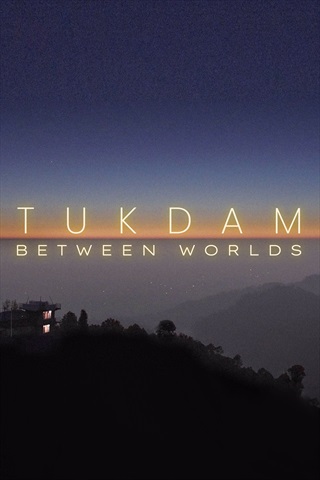 Most of us think of death as something clear-cut, and that medical science has it neatly figured out. This feature documentary explodes such assumptions through its exploration of a phenomenon that blurs life and death to an unprecedented degree. In what Tibetan Buddhists call tukdam, advanced meditators die in a consciously controlled manner. Though dead according to our biomedical standards, they often stay sitting upright in meditation; remarkably, their bodies remain fresh and lifelike, without signs of decay for days, sometimes weeks after clinical death. 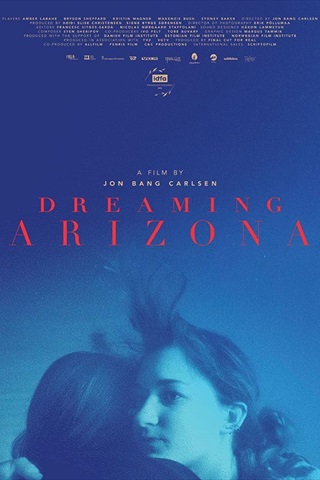 Where does the dream begin and reality end? In Dreaming Arizona, this is the question both for the central figures and for the viewer. Known for his staged documentaries, Danish director Jon Bang Carlsen has five American teenagers from a small town in Arizona reenact their own lives—past, present and future. Without commentary, the scenes move from clearly staged situations to sections in which the young people talk about their own lives, feelings and impactful events. They also talk to each other, and when arguments occur it’s unclear whether they are real or acted. 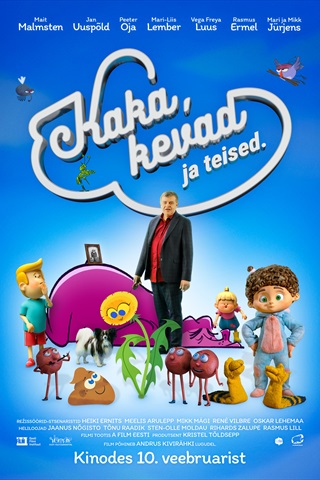 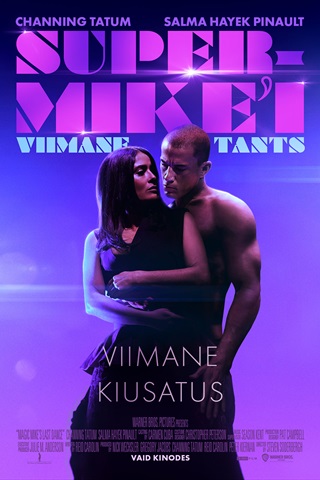 Just in time for Valentine’s Day comes the third installment of the blockbuster “Magic Mike” film franchise, the musical comedy “Magic Mike’s Last Dance.” The creative team behind the first film, which garnered praise from critics and audiences alike, has reunited to create the magic again: Channing Tatum reprises his role as Mike Lane and Steven Soderbergh returns to the helm with a script from Reid Carolin, who also wrote the first two films. 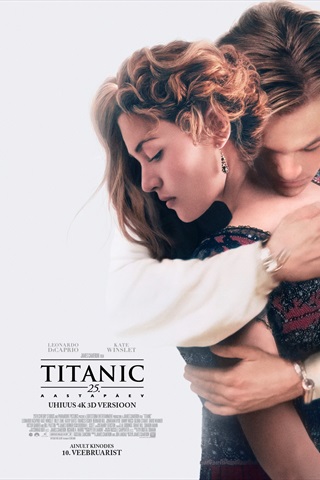 Celebrate the 25th anniversary of the timeless love story this Valentine’s Day Weekend. Titanic returns to the big screen in remastered 4K 3D on February 10. In celebration of its 25th anniversary, a remastered version of James Cameron’s multi-Academy Award®-winning “Titanic” will be re-released to theaters in 3D. With a cast headed by Oscar® winners Leonardo DiCaprio and Kate Winslet, the film is an epic, action-packed romance set against the ill-fated maiden voyage of the "unsinkable" Titanic, at the time, the largest moving object ever built. 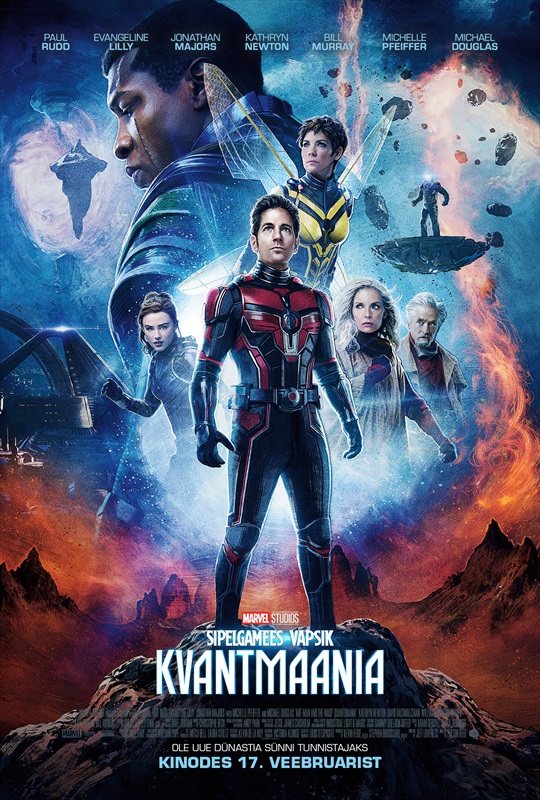 Ant-Man and The Wasp: Quantumania

Ant-Man and The Wasp: Quantumania

In the film, which officially kicks off phase 5 of the Marvel Cinematic Universe, Super-Hero partners Scott Lang (Paul Rudd) and Hope Van Dyne (Evangeline Lilly) return to continue their adventures as Ant-Man and the Wasp. Together, with Hope’s parents Hank Pym (Michael Douglas) and Janet Van Dyne (Michelle Pfeiffer), the family finds themselves exploring the Quantum Realm, interacting with strange new creatures and embarking on an adventure that will push them beyond the limits of what they thought was possible. Jonathan Majors joins the adventure as Kang. 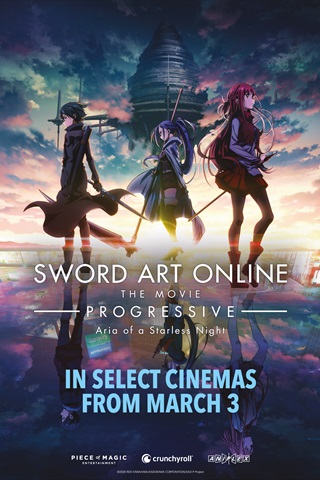 This is a tale of the time before “Lightning Flash” and “The Black Swordsman” were known by those names… The day that she happened to don the NerveGear, Asuna Yuuki was a third-year middle school student who’d never even touched an online game before. On November 6, 2022, the world’s first VRMMORPG, Sword Art Online, is officially launched. But the players, still euphoric over having logged in, suddenly find themselves trapped inside the game when the Game Master deprives them of any way to log out. 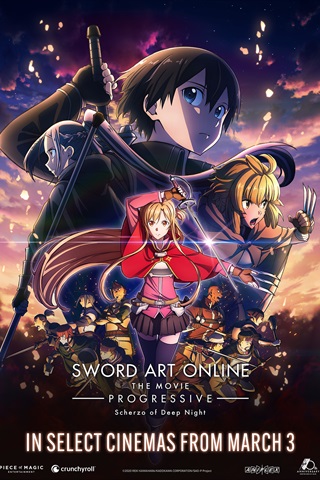 The world’s first VRMMORPG (Sword Art Online) became a game of death. Over a month has passed since 10,000 users were trapped inside the game world. Asuna, who cleared the first floor of the floating iron castle of Aincrad, joined up with Kirito and continued her journey to reach the top floor. With the support of female Information Broker Argo, clearing the floors seemed to be progressing smoothly, but… Conflict erupts between two major guilds who should be working together – the top player groups ALS (the Aincrad Liberation Squad) and DKB (the Dragon Knights Brigade). 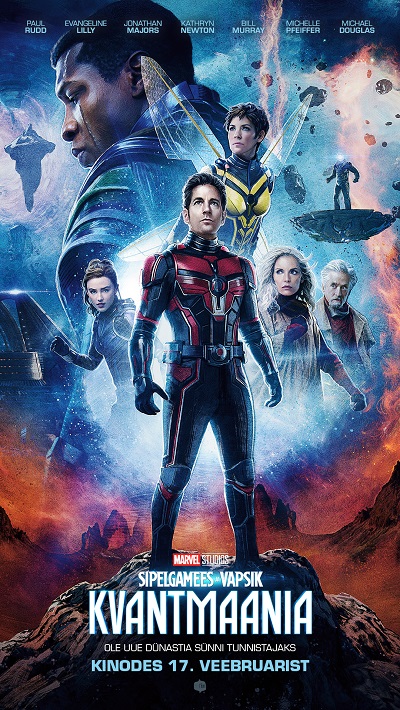